NAHB: Builder Confidence Increased to Record High for the 55+ Housing Market in Q1

This index is similar to the overall NAHB housing market index (HMI), but only released quarterly. The NAHB started this index in Q4 2008 (during the housing bust), so the readings were initially very low.


Builder confidence in the single-family 55+ housing market continued to strengthen in the first quarter of 2019 with a reading of 72, up six points from the previous quarter, according to the National Association of Home Builders' (NAHB) 55+ Housing Market Index (HMI) released today. This is the highest reading since the inception of the index in 2008.
...
"Overall, demand for homes in 55+ communities remain strong as more buyers and renters in that market search for simpler living arrangements,” said Karen Schroeder, chair of NAHB's 55+ Housing Industry Council and vice president of Mayberry Homes in East Lansing, Mich. “However, there are still headwinds that are impacting the market, such as rising construction costs and a lack of skilled labor.”

All three index components of the 55+ single-family HMI posted increases from the previous quarter: Present sales rose four points to 76, expected sales for the next six months increased seven points to 77 and traffic of prospective buyers climbed eight points to 61.
emphasis added 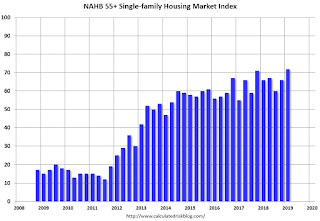 This graph shows the NAHB 55+ Single Family HMI through Q1 2019.  Any reading above 50 indicates that more builders view conditions as good than as  poor.  The index increased to 72 in Q1 up from 66 in Q4.

There are two key drivers in addition to the improved economy: 1) there is a large cohort that recently moved into the 55+ group, and 2) the homeownership rate typically increases for people in the 55 to 70 year old age group. So demographics are favorable for the 55+ market.
Posted by Calculated Risk on 5/08/2019 04:21:00 PM
Newer Post Older Post Home