From the Census Bureau reported that overall construction spending decreased in March:


Spending on private construction was at a seasonally adjusted annual rate of $961.5 billion, 0.7 percent below the revised February estimate of $968.6 billion. ... 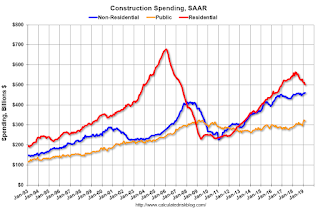 Private residential spending had been increasing - but turned down in the 2nd half of 2018 - and is now 26% below the bubble peak.

Non-residential spending is 11% above the previous peak in January 2008 (nominal dollars).

Public construction spending is just below the previous peak in March 2009, and 23% above the austerity low in February 2014. 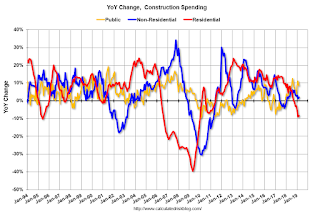 This was well below consensus expectations, and spending for January and February were revised down significantly.  A weak report.
Posted by Calculated Risk on 5/01/2019 11:14:00 AM
Newer Post Older Post Home