The number of job openings rose to 7.5 million on the last business day of March, the U.S. Bureau of Labor Statistics reported today. Over the month, hires and separations were little changed at 5.7 million and 5.4 million, respectively. Within separations, the quits rate was unchanged at 2.3 percent and the layoffs and discharges rate was little changed at 1.1 percent. This release includes estimates of the number and rate of job openings, hires, and separations for the nonfarm sector by industry and by four geographic regions. ...

Note: The difference between JOLTS hires and separations is similar to the CES (payroll survey) net jobs headline numbers. This report is for March, the most recent employment report was for April. 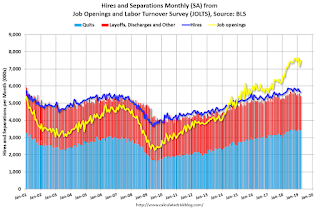 Jobs openings increased in March to 7.488 million from 7.142 million in February.

The number of job openings (yellow) are up 9% year-over-year.

Quits are up 3% year-over-year. These are voluntary separations. (see light blue columns at bottom of graph for trend for "quits").

Job openings remain at a high level, and quits are still increasing year-over-year. This was still a solid report.
Posted by Calculated Risk on 5/07/2019 10:08:00 AM
Newer Post Older Post Home