This gives a total of 4.16% delinquent or in foreclosure.


Today, the Data & Analytics division of Black Knight, Inc. released its latest Mortgage Monitor Report, based upon the company’s industry-leading mortgage performance, housing and public records datasets. This month, by leveraging its McDash loan-level mortgage performance data in combination with public property records, Black Knight undertook an analysis of mortgage servicer retention rates by looking at consecutive mortgages on a single property before and after a refinance transaction. As Black Knight’s Data & Analytics Division President Ben Graboske explained, retention rates – the share of borrowers who remain with their prior servicer post-refinance – have reached record lows, creating serious challenges in an ever more competitive marketplace.

“In Q1 2019, fewer than one in five homeowners remained with their prior mortgage servicer after refinancing their first lien,” said Graboske. “That is the lowest retention rate we’ve seen since Black Knight began tracking the metric in 2005. Anyone in this industry can tell you that customer retention is key – not only to success, but to survival. The challenge is that everyone is competing for a piece of a shrinking refinance market, the size of which is incredibly rate-sensitive, and therefore volatile in its make-up. Just a month ago, we were reporting that recent rate reductions had swelled the population of eligible refinance candidates by more than half in a single week after hitting a multi-year low just a few months before. Then, with just a slight increase in the 30-year fixed rate – less than one-eighth of a point – 1 million homeowners lost their rate incentive to refinance – almost 20% of the total eligible market.

“This is critical, because refinances driven by a homeowner seeking to reduce their rate or term have always been servicers’ ‘bread and butter’ when it comes to customer retention. Offering lower rates to qualified existing customers is a good, and relatively simple, way to retain their business. Unfortunately, the market has shifted dramatically away from such rate/term refinances. In fact, nearly 80% of 2018 refinances involved the customer pulling equity out of their home – and more than two-thirds of those raised their interest rate to do so. Retention battles are no longer won – or lost – based on interest rates alone. A simple ‘in the money analysis’ doesn’t provide the insight necessary to retain customers and can’t take the place of accurately identifying borrowers who are likely to refinance and offering them the correct product. Rather, understanding equity position – and the willingness to utilize that equity – is key to accurately identifying attrition risk and reaching out to retain that business.”
emphasis added 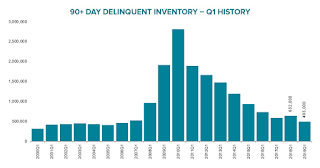 Here is a graph from the Mortgage Monitor that shows the Q1 90 day National delinquency inventory over time. 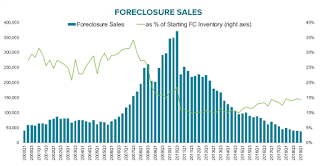