Volumes for U.S. railroads in April 2019 were far from ideal, but they were much better than in March. Total carloads in April were down 0.9% (9,130 carloads), compared with a decline of 8.9% (93,616 carloads) in March. … The improvement in April was due partly to a return to near-normal operations in the Midwest as numerous rail lines that had been flooded were returned to service — coal and grain were especially impacted. ... Intermodal volume fell 3.9%, or 42,832 containers and trailers, in April 2019 from April 2018. That’s the third-straight monthly decline for intermodal, something that hasn’t happened since the fall of 2016.
emphasis added 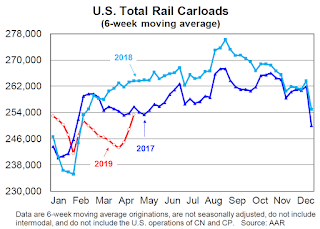 
Rail traffic in April 2019 won’t win any prizes, but it could’ve been worse. 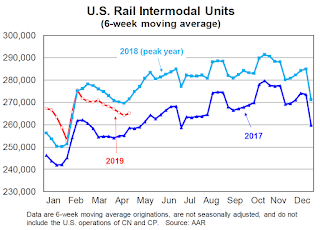 
For the first four months of 2019, intermodal volume was down 1.4%, or 62,724 units, from the same period in 2019 … This year had a few moving pieces that aren’t always there — e.g., imports being rushed ashore late last year to beat scheduled tariff increases at the start of this year; intermodal lane rationalizations in some areas; the aforementioned flooding; and an economy that’s been even harder than usual to read.