The national average asking rent increased 0.4% in the first quarter while the effective rent, which nets out landlord concessions, increased 0.5% in the quarter. At $33.58 per square foot (asking) and $27.26 per square foot (effective), the average rents have increased 2.2% and 2.3%, respectively, from the first quarter of 2018.
...
In the tenth year of the expansion, the office market continues to move at a snail’s pace. That said, the widening gap between the stronger markets and weaker ones is particularly noteworthy and is otherwise obscured by the flat national numbers. The underlying data shows that tech firms are fueling much of the growth in the stronger office markets, particularly in west coast metros, parts of Texas and parts of the east coast.

With more construction underway in 2019, vacancy is expected to increase a bit more while rent growth should continue to stay below the rate of inflation. 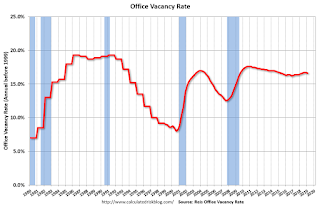 Reis reported the vacancy rate was at 16.6% in Q1.  The office vacancy rate had been mostly moving sideways at an elevated level.