Mortgage applications decreased 5.6 percent from one week earlier, according to data from the Mortgage Bankers Association’s (MBA) Weekly Mortgage Applications Survey for the week ending April 5, 2019.

... The Refinance Index decreased 11 percent from the previous week. The seasonally adjusted Purchase Index increased 1 percent from one week earlier. The unadjusted Purchase Index increased 1 percent compared with the previous week and was 13 percent higher than the same week one year ago.
...
“Mortgage rates inched back up last week, but remain substantially lower than they were in the second half of last year,” said Mike Fratantoni, MBA Senior Vice President and Chief Economist. “As quickly as refinance activity increased in recent weeks, it backed down again in response to the rise in rates. However, this spring’s lower borrowing costs, coupled with the strong job market, continue to push purchase application volume much higher. Purchase applications are now up more than 13 percent compared to last year at this time.”
...
The average contract interest rate for 30-year fixed-rate mortgages with conforming loan balances ($484,350 or less) increased to 4.40 percent from 4.36 percent, with points increasing to 0.47 from 0.44 (including the origination fee) for 80 percent loan-to-value ratio (LTV) loans.
emphasis added 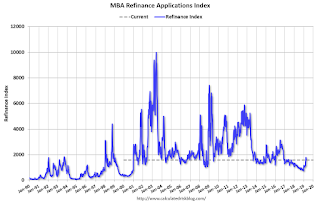 Once mortgage rates fell more than 50 bps from the highs of last year, a number of recent buyers were able to refinance.  But it would take another significant decrease in rates to see further refinance activity. 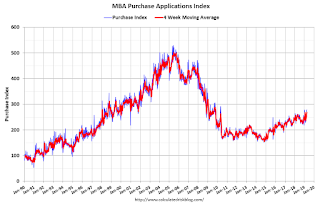