From the Dallas Fed: Growth in Texas Manufacturing Activity Picks Up Slightly

Other measures of manufacturing activity also suggested slightly faster expansion in April. The survey’s demand indicators bounced back after dipping last month: The new orders index rose eight points to 9.8, and the growth rate of orders index rose from -2.0 to 5.2. The capacity utilization index pushed to a seven-month high of 15.6, while the shipments index held fairly steady at 6.3.

Perceptions of broader business conditions continued to improve in April. The general business activity index remained positive for a third month in a row but fell five points to 2.0. Meanwhile, the company outlook index climbed two points to 6.3.

This was the last of the regional Fed surveys for April. 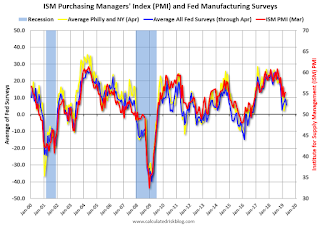 Based on these regional surveys, it seems likely the ISM manufacturing index will be at about the same level in April as in March, maybe slightly lower. The consensus forecast is for a reading of 55.0, down slightly from 55.3 in March (to be released on Wednesday, May 1st).
Posted by Calculated Risk on 4/29/2019 10:36:00 AM
Newer Post Older Post Home