The BEA has released the underlying details for the Q4 initial GDP report.

The BEA reported that investment in non-residential structures decreased at a 4.2% annual pace in Q4.  Investment in petroleum and natural gas exploration increased in Q4 compared to Q3, and has increased substantially recently (although this may change with the recent decline in oil prices).

Without the increase in petroleum and natural gas exploration, non-residential investment would only be up about 5% year-over-year. 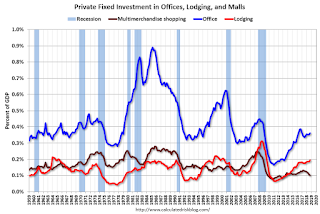 Investment in offices increased in Q4, and is up 12% year-over-year.

Investment in multimerchandise shopping structures (malls) peaked in 2007 and was down about 15% year-over-year in Q4.   The vacancy rate for malls is still very high, so investment will probably stay low for some time. 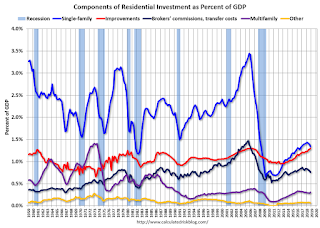 Home improvement was the top category for five consecutive years following the housing bust ... but now investment in single family structures has been back on top for the last six years - although single family investment has been down a little recently.

Investment in home improvement was at a $270 billion Seasonally Adjusted Annual Rate (SAAR) in Q4 (about 1.3% of GDP).  Home improvement spending has been solid.