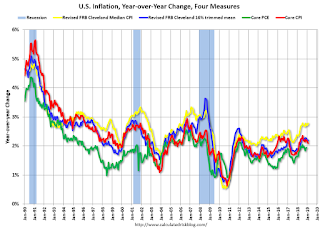 Using these measures, inflation was about the same in February as in January on a year-over-year basis. Overall, these measures are at or above the Fed's 2% target (Core PCE is below 2%).
Posted by Calculated Risk on 3/12/2019 11:21:00 AM
Newer Post Older Post Home