“Factories in the region reported an uptick in growth in March, following three straight months in which the pace of growth slowed,” said Wilkerson. “Plans for both hiring and capital spending picked up.”
...
The month-over-month composite index was 10 in March, up from 1 in February and 5 in January. The composite index is an average of the production, new orders, employment, supplier delivery time, and raw materials inventory indexes. Factories expanded production of both durable and nondurable goods, particularly food and beverage products, as well as wood, paper, and printing manufacturing. Most month-over-month indexes increased in March, with production, shipments, new orders, order backlog, new orders for exports, and materials inventories rebounding back into positive territory. Most year-over-year factory indexes grew in March, and the composite index rose from 23 to 27. The future composite index also climbed up from 13 to 22, as future factory activity expectations increased across the board.
emphasis added

This was the last of the regional Fed surveys for March. 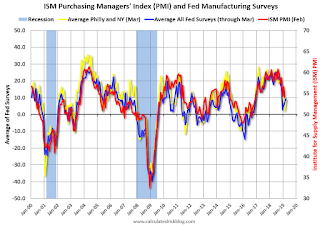 Based on these regional surveys, it seems likely the ISM manufacturing index will be at about the same level in March as in February, maybe slightly higher. The early consensus forecast is for a reading of 54.5, up slightly from 54.2 in February (to be released on Monday, April 1st).
Posted by Calculated Risk on 3/28/2019 11:00:00 AM
Newer Post Older Post Home