The National Association of Home Builders (NAHB) reported the housing market index (HMI) was at 62 in February, up from 58 in January. Any number above 50 indicates that more builders view sales conditions as good than poor.

“Ongoing reduction in mortgage rates in recent weeks coupled with continued strength in the job market are helping to fuel builder sentiment,” said NAHB Chairman Randy Noel, a custom home builder from LaPlace, La. “In the aftermath of the fall slowdown, many builders are reporting positive expectations for the spring selling season.”

February marked the second consecutive month in which all the HMI indices posted gains. The index measuring current sales conditions rose three points to 67, the component gauging expectations in the next six months increased five points to 68 and the metric charting buyer traffic moved up four points to 48.

“Builder confidence levels moved up in tandem with growing consumer confidence and falling interest rates,” said NAHB Chief Economist Robert Dietz. “The five-point jump on the six-month sales expectation for the HMI is due to mortgage interest rates dropping from about 5 percent in November to 4.4 percent this week. However, affordability remains a critical issue. Rising costs stemming from excessive regulations, a dearth of buildable lots, a persistent labor shortage and tariffs on lumber and other key building materials continue to make it increasingly difficult to produce housing at affordable price points.”
…
Looking at the three-month moving averages for regional HMI scores, the South posted a one-point gain to 63 while the Northeast dropped two points to 43. The Midwest and West each remained unchanged at 52 and 67, respectively.
emphasis added 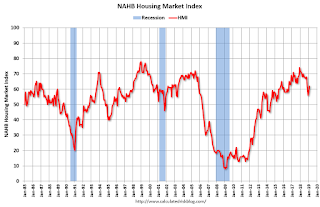 This graph show the NAHB index since Jan 1985.