Mortgage applications increased 5.3 percent from one week earlier, according to data from the Mortgage Bankers Association’s (MBA) Weekly Mortgage Applications Survey for the week ending February 22, 2019. This week’s results include an adjustment for the Washington's Birthday (Presidents’ Day) holiday.

... The Refinance Index increased 5 percent from the previous week. The seasonally adjusted Purchase Index increased 6 percent from one week earlier. The unadjusted Purchase Index decreased 1 percent compared with the previous week and was 3 percent higher than the same week one year ago.
...
“Mortgage rates were little changed last week, but as we anticipated, homebuyers are responding favorably to this more stable rate environment,” said Mike Fratantoni, MBA Senior Vice President and Chief Economist. “Purchase applications for both conventional and government loans rose last week, with the government gain led by a 14 percent increase in applications for VA purchase loans.”

Added Fratantoni, “Refinance application volume increased as well, with the index reaching its highest level in a month. Borrowers with larger loans tend to be more responsive for a given drop in rates, and competition for these loans is fierce. Therefore, it was not surprising to see the average rate for a 30-year fixed jumbo loan drop to its lowest level since January 2018.”
...
The average contract interest rate for 30-year fixed-rate mortgages with conforming loan balances ($484,350 or less) decreased to 4.65 percent from 4.66 percent, with points remaining unchanged at 0.42 (including the origination fee) for 80 percent loan-to-value ratio (LTV) loans.
emphasis added 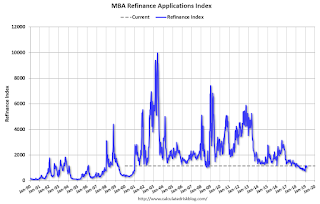 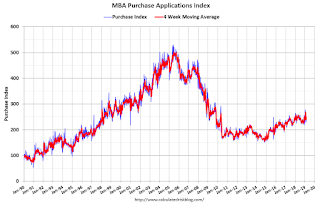