Mortgage applications increased 3.6 percent from one week earlier, according to data from the Mortgage Bankers Association’s (MBA) Weekly Mortgage Applications Survey for the week ending February 15, 2019.

... The Refinance Index increased 6 percent from the previous week. The seasonally adjusted Purchase Index increased 2 percent from one week earlier. The unadjusted Purchase Index increased 7 percent compared with the previous week and was 3 percent higher than the same week one year ago.
...
“Mortgage rates held steady on mixed economic news, as core inflation remained firm, while retail sales in December were much weaker than expected. However, overall application activity picked up over the week,” said Joel Kan, MBA’s Associate Vice President of Industry Surveys and Forecasts. “After four consecutive declines, purchase applications increased almost 2 percent over the week and 2.5 percent compared to a year ago – showing some promise as we edge closer to the spring homebuying season.”

Added Kan, “Most rates remained close to 10-month lows, which allowed some borrowers with an incentive to refinance to capitalize. The 30-year fixed rate was essentially unchanged at 4.66 percent.”
...
The average contract interest rate for 30-year fixed-rate mortgages with conforming loan balances ($484,350 or less) increased to 4.66 percent from 4.65 percent, with points decreasing to 0.42 from 0.43 (including the origination fee) for 80 percent loan-to-value ratio (LTV) loans.
emphasis added 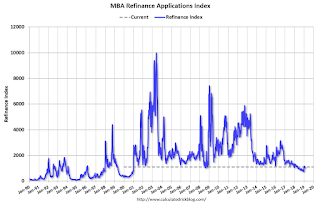 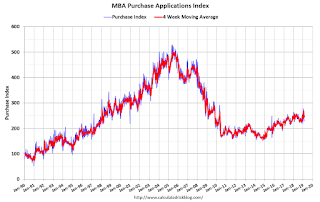