... The Refinance Index increased 0.3 from the previous week. The seasonally adjusted Purchase Index decreased 5 percent from one week earlier. The unadjusted Purchase Index increased 13 percent compared with the previous week and was 2 percent lower than the same week one year ago.
...
“Mortgage rates for all loan types declined last week, with the 30-year fixed mortgage rate falling seven basis points to 4.69 percent – the lowest rate since April 2018,” said Joel Kan, Associate Vice President of Industry Surveys and Forecasts. “Despite more favorable borrowing costs, and after a three-week surge in activity, purchase applications have slowed over the past two weeks, and are now almost 2 percent lower than a year ago. However, moderating price gains and the strong job market, including evidence of faster wage growth, should help purchase growth going forward.”

Added Kan, “Refinance applications saw a very slight increase compared to the previous week, despite the broad decline in rates.”
...
The average contract interest rate for 30-year fixed-rate mortgages with conforming loan balances ($484,350 or less) decreased to 4.69 percent from 4.76 percent, with points decreasing to 0.45 from 0.47 (including the origination fee) for 80 percent loan-to-value ratio (LTV) loans.
emphasis added 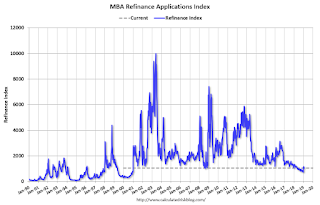 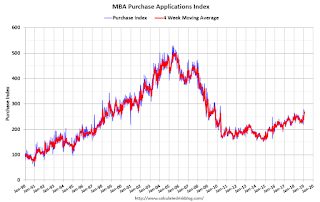