Freddie Mac reported that the Single-Family serious delinquency rate in January was 0.70%, up slightly from 0.69% in December. Freddie's rate is down from 1.07% in January 2018.

This is the lowest serious delinquency rate for Freddie Mac since December 2007. 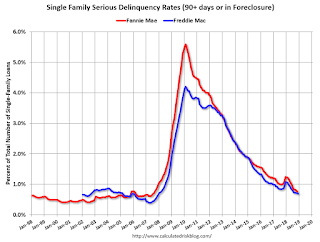 The increase in the delinquency rate in late 2017 and early 2018 was due to the hurricanes (These are serious delinquencies, so it took three months late to be counted).