I keep getting asked if I could post an update to the graph, and here it is through the December 2018 report. 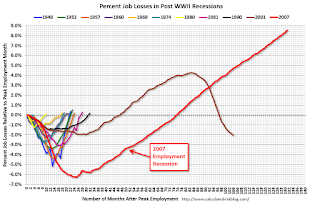 This graph shows the job losses from the start of the employment recession, in percentage terms, compared to previous post WWII recessions.  Since exceeding the pre-recession peak in May 2014, employment is now 8.6% above the previous peak.