Manufacturing activity in the region continued to grow, according to results from the January Manufacturing Business Outlook Survey. The survey’s broad indicators remained positive, although their movements were mixed again this month: The general activity and new orders indicators increased from their readings last month, while the indicators for shipments and employment decreased. The firms reported growth in the underlying demand for their products and are generally optimistic about future growth and employment.

The index for current manufacturing activity in the region increased from a revised reading of 9.1 in December to 17.0 this month. Over 30 percent of the manufacturers reported increases in overall activity, while 13 percent reported decreases. The new orders index increased 8 points to 21.3, its highest reading in six months. … The firms continued to report overall higher employment, but the current employment index fell nearly 10 points to 9.6, its lowest reading in 16 months.
emphasis added 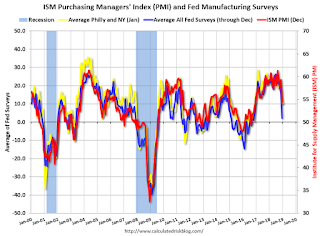 This suggests the ISM manufacturing index will show expansion again in January, at about the same level as in December.
Posted by Calculated Risk on 1/17/2019 09:30:00 AM
Newer Post Older Post Home