Mortgage applications increased 13.5 percent from one week earlier, according to data from the Mortgage Bankers Association’s (MBA) Weekly Mortgage Applications Survey for the week ending January 11, 2019.

... The Refinance Index increased 19 percent from the previous week to its highest level since March 2018. The seasonally adjusted Purchase Index increased 9 percent from one week earlier to its highest level since April 2010. The unadjusted Purchase Index increased 43 percent compared with the previous week and was 11 percent higher than the same week one year ago.
...
“Mortgage applications rose to their strongest level in years last week, with purchase applications rising to the highest since 2010, and refinance applications up to their highest level since last spring,” said Mike Fratantoni, MBA Senior Vice President and Chief Economist. “Uncertainty regarding the government shutdown, slowing global growth, Brexit, a more patient Fed, and a volatile stock market continued to keep rates from increasing. The spring homebuying season is almost upon us, and if rates stay lower, inventory continues to grow, and the job market maintains its strength, we do expect to see a solid spring market. The 11 percent gain in purchase volume compared to last year is a promising sign.”

Added Fratantoni, “Borrowers with larger loans tend to be more responsive to a given drop in mortgage rates, and we are seeing that so far in 2019. Furthermore, borrowers with jumbo loans are also more apt to take adjustable-rate mortgages as opposed to fixed-rate loans. Thus, it is not surprising to see the ARM share at its highest level since 2014. These borrowers may also feel more confident taking an adjustable-rate mortgage given the expectation of a more patient Fed.”
...
The average contract interest rate for 30-year fixed-rate mortgages with conforming loan balances ($484,350 or less) remain unchanged at 4.74 percent, with points decreasing to 0.45 from 0.47 (including the origination fee) for 80 percent loan-to-value ratio (LTV) loans.
emphasis added Refinance activity is at the highest level since last Spring. 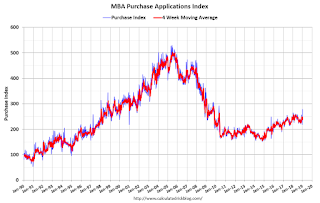 The one week seasonally adjusted purchase index is at the highest level since 2010 (that spike in 2010 was related to homebuyer tax credit).   It is just one week, and the seasonal adjustment in January is very strong (since activity is always soft in January).