Mortgage applications increased 23.5 percent from one week earlier, according to data from the Mortgage Bankers Association’s (MBA) Weekly Mortgage Applications Survey for the week ending January 4, 2019. This week’s results include an adjustment for the New Year’s Day holiday.

... The Refinance Index increased 35 percent from the previous week. The seasonally adjusted Purchase Index increased 17 percent from one week earlier. The unadjusted Purchase Index increased 59 percent compared with the previous week and was 4 percent higher than the same week one year ago.
...
“Mortgage rates fell across the board last week and applications rebounded sharply, after what was a slower than usual holiday period. The 30-year fixed-rate mortgage declined 10 basis points to 4.74 percent, the lowest since April 2018, and other loan types saw rate decreases of between 9 and 20 basis points,” said Joel Kan, MBA’s Associate Vice President of Economic and Industry Forecasting. “This drop in rates spurred a flurry of refinance activity – particularly for borrowers with larger loans – and pushed the average loan size on refinance applications to the highest in the survey (at $339,800). The surge in refinance activity also brought the refinance index to its highest level since last July.”

Added Kan, “Purchase applications had their strongest week in a month, finishing over four percent higher than a year ago, as both conventional and government purchase activity bounced back with solid gains after a sluggish holiday season.”
...
The average contract interest rate for 30-year fixed-rate mortgages with conforming loan balances ($484,350 or less) decreased to its lowest level since April 2018, 4.74 percent, from 4.84 percent, with points increasing to 0.47 from 0.42 (including the origination fee) for 80 percent loan-to-value ratio (LTV) loans.
emphasis added 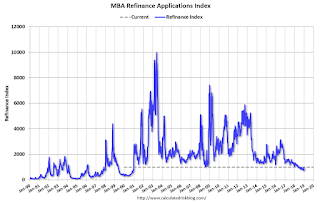 Refinance activity will not pick up significantly unless mortgage rates fall 50 bps or more from the recent level. 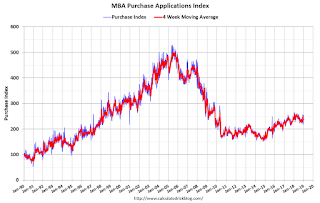