Mortgage applications decreased 3.0 percent from one week earlier, according to data from the Mortgage Bankers Association’s (MBA) Weekly Mortgage Applications Survey for the week ending January 25, 2019. This week’s results include an adjustment for the Martin Luther King Jr. Day holiday.

... The Refinance Index decreased 6 percent from the previous week. The seasonally adjusted Purchase Index decreased 2 percent from one week earlier. The unadjusted Purchase Index decreased 6 percent compared with the previous week and was 7 percent lower than the same week one year ago.
...
“Mortgage applications for purchase and refinances were lower over the past week, as rates nudged higher,” said Joel Kan, MBA’s Associate Vice President of Industry Surveys and Forecasts. “After two weeks of decreases, the purchase index still remained roughly 6 percent above its long-run average, which is good news with the spring buying and selling season almost underway. Despite ongoing supply and affordability constraints, the healthy job market and underlying demographic fundamentals both point to gradual purchase growth in the coming months.”

Added Kan, “Refinance activity had seen a small resurgence in the past few weeks, but there still remains only a small share of borrowers left to gain from rates at the current levels.”
...
The average contract interest rate for 30-year fixed-rate mortgages with conforming loan balances ($484,350 or less) increased to 4.76 percent from 4.75 percent, with points increasing to 0.47 from 0.44 (including the origination fee) for 80 percent loan-to-value ratio (LTV) loans.
emphasis added 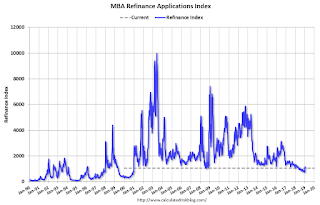 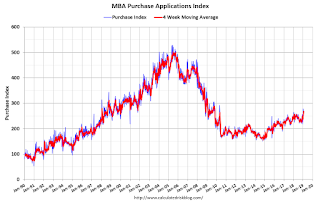