Industrial production increased 0.3 percent in December after rising 0.4 percent in November. For the fourth quarter as a whole, total industrial production moved up at an annual rate of 3.8 percent. In December, manufacturing output increased 1.1 percent, its largest gain since February 2018. The output of mines rose 1.5 percent, but the index for utilities fell 6.3 percent, as warmer-than-usual temperatures lowered the demand for heating. At 109.9 percent of its 2012 average, total industrial production was 4.0 percent higher in December than it was a year earlier. Capacity utilization for the industrial sector rose 0.1 percentage point in December to 78.7 percent, a rate that is 1.1 percentage points below its long-run (1972–2017) average.
emphasis added 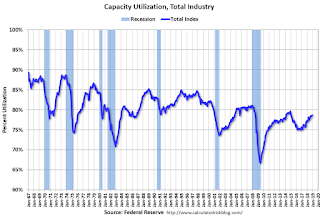 This graph shows Capacity Utilization. This series is up 12.0 percentage points from the record low set in June 2009 (the series starts in 1967). 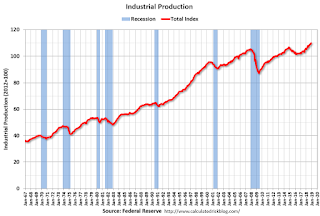 Industrial production increased in December to 109.9. This is 26% above the recession low, and 4% above the pre-recession peak.

The increase in industrial production was above the consensus forecast.  Capacity utilization was also above consensus.
Posted by Calculated Risk on 1/18/2019 09:25:00 AM
Newer Post Older Post Home