From the Dallas Fed: Growth in Texas Manufacturing Activity Accelerates


Texas factory activity continued to expand in January, according to business executives responding to the Texas Manufacturing Outlook Survey. The production index, a key measure of state manufacturing conditions, rose from 7.3 to 14.5, indicating an acceleration in output growth.

Other measures of manufacturing activity also suggested continued expansion in January, although the pace of demand growth slowed a bit. The capacity utilization index rose seven points to 14.8, and the shipments index rose five points to 11.4. Meanwhile, the new orders index edged down to 11.6 and the growth rate of new orders index fell from 5.8 to 1.2.

Perceptions of broader business conditions improved in January. The general business activity index rebounded from a multiyear low of -5.1 in December to 1.0 in January. This near-zero reading suggests manufacturers were fairly balanced in their assessment of whether activity had improved or worsened from last month. The company outlook index also rebounded from negative territory this month, rising more than 10 points to 7.1.

This was the last of the regional Fed surveys for December. 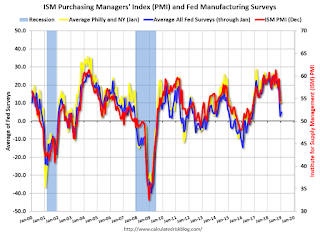 Based on these regional surveys, it seems likely the ISM manufacturing index will be at about the same level in January as in December. The consensus forecast is for a reading of 54.0 (to be released on Friday, February 1st).
Posted by Calculated Risk on 1/28/2019 10:35:00 AM
Newer Post Older Post Home