First, this report was for November (it was almost ready to release when the government shutdown began in December). The December report will probably be released soon, but no release date has been announced yet. Based on other data, I'd expect sales to be weak in December, but talking to builders, I expect a rebound in January.

New home sales for November were reported at 657,000 on a seasonally adjusted annual rate basis (SAAR). This was well above the consensus forecast, and the three previous months were revised up.

Sales in November were down 7.2% year-over-year compared to November 2017.

On Inventory: Months of inventory is now at the top of the normal range, however the number of units completed and under construction is still somewhat low.   Inventory will be something to watch very closely. 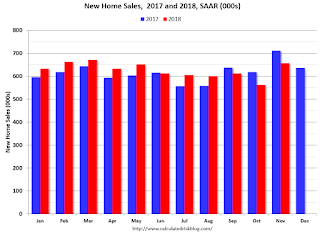 Sales are only up 2.7% through November compared to the same period in 2017.

The comparison for November was difficult (sales in November 2017 were very strong).  And the comparison in December will also be somewhat difficult.  Overall sales might finish the year down from 2017, but it should be close.

This is below my forecast for 2018 for an increase of about 6% over 2017. As I noted early this year, there were downside risks to that forecast, primarily higher mortgage rates, but also higher costs (labor and material), the impact of the new tax law, and other possible policy errors. 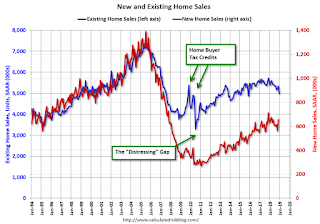