November Vehicles Sales: 17.4 Million SAAR, On Pace to be unchanged in 2018

The BEA released their estimate of November vehicle sales. The BEA estimated sales of 17.40 million SAAR in November 2018 (Seasonally Adjusted Annual Rate), down 0.5% from the October sales rate, and down 0.7% from November 2017.

Through November, light vehicle sales are on pace to be mostly unchanged in 2018 compared to 2017. 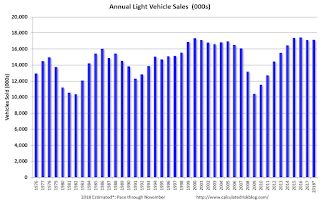 Sales for 2018 are estimated based on the pace of sales during the first eleven months. 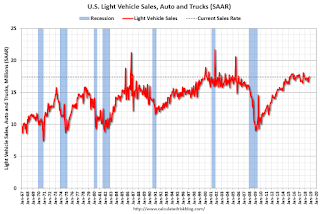 My guess is vehicle sales will finish the year with sales slightly lower than in 2017 (sales in late 2017 were boosted by buying following the hurricanes), and will probably be just over 17 million for the year (the lowest since 2014).  But sales will be close to last year.

A small decline - or no change - in sales this year isn't a concern - I think sales will move mostly sideways at near record levels.