Note: The Cleveland Fed released the median CPI details for November here. Motor fuel was down 40% annualized in November. 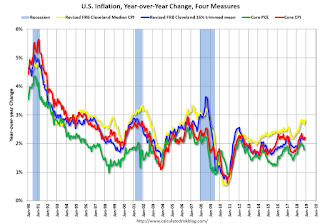 Using these measures, inflation picked up slightly on a year-over-year basis in November. Overall, these measures are at or above the Fed's 2% target (Core PCE is below 2%).
Posted by Calculated Risk on 12/12/2018 11:10:00 AM
Newer Post Older Post Home