Texas factory activity continued to expand rather modestly in December, according to business executives responding to the Texas Manufacturing Outlook Survey. The production index, a key measure of state manufacturing conditions, inched down one point to 7.3.

Other indexes of manufacturing activity also suggested modest growth in December, although demand growth picked up a bit. The capacity utilization index fell from 9.4 to 7.6, and the shipments index dipped to 6.1. Meanwhile, the new orders index moved up five points to 14.4, and the growth rate of new orders index edged up to 5.8.

This was the last of the regional Fed surveys for December. 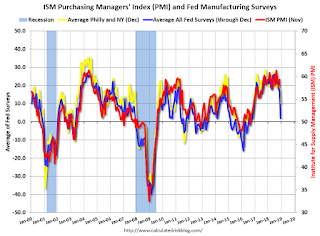 Based on these regional surveys, it seems likely the ISM manufacturing index will decline significantly in December and probably be below the consensus forecast of 58.0 (to be released on Thursday, January 3rd).
Posted by Calculated Risk on 12/31/2018 10:38:00 AM
Newer Post Older Post Home