This gives a total of 4.16% delinquent or in foreclosure.


Today, the Data & Analytics division of Black Knight, Inc. released its latest Mortgage Monitor Report, based on data as of the end of October 2018. This month, Black Knight looked at full Q3 2018 data to revisit the U.S. home equity landscape, finding that quarterly declines were seen in both total equity and tappable equity, the amount available for homeowners with mortgages to borrow against before hitting a maximum 80 percent combined loan-to-value (LTV) ratio. Ben Graboske, executive vice president of Black Knight’s Data & Analytics division, explained that the decline is being driven by home prices pulling back on a quarterly basis in some of the nation’s most expensive housing markets.

“After seeing a significant slowdown in its growth from the first to second quarters of 2018, the amount of tappable equity fell by $140 billion in Q3 2018,” said Graboske. “That is the first decline we’ve seen since the housing recovery began, and its cause can be traced directly to softening home prices in some of the nation’s most expensive – and equity- rich – markets. Indeed, tappable equity fell in 60 of the 100 largest markets, including 12 of the top 15. Three markets in California alone – San Jose, San Francisco and Los Angeles – accounted for 55 percent of the total net decline. Add Seattle into the mix, and you see that just four markets were behind two-thirds of the net reduction in tappable equity. All were areas where home price growth has far outpaced the national average in recent years, but in which prices fell in Q3 2018 – from as little as one percent in Los Angeles, to a 4.6 percent drop in San Jose.

“Of course, there is still $9.8 trillion in total home equity in the market, some $5.9 trillion of which is tappable. That’s $571 billion more than in Q3 2017, and tappable equity remains near an all-time high. It’s also important to remember that in general third quarters are relatively flat as far as home prices are concerned, and that tappable equity is up on an annual basis in 98 percent of major metro areas. But the fact remains that affordability concerns are beginning to have an impact on home prices, particularly in more expensive markets, and as a result, on homeowner equity as well.

Interestingly enough – although for-sale inventory is up on an annual basis for the first time in four years – an analysis of listings on mortgaged properties suggests that homeowners reluctant to put their current homes on the market due to ‘rate lock’ or ‘affordability lock’ may still be holding down available inventory by about six percent. By constraining the supply of available homes, this in turn may be countering what might otherwise be greater downward pressure on home prices.”
emphasis added 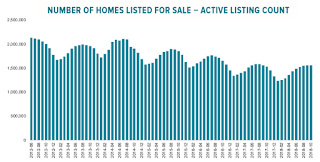 
• After hitting a post-recession low in January 2018, for sale inventory is up 2% from last year

• That's the first annual increase in more than 4 years, as softening demand causes a net increase in the number of homes listed for sale

• As a point of comparison, and similar to today, the increase in inventory in 2013/2014 was due in part to rising rates putting pressure on the buy side of the housing equation 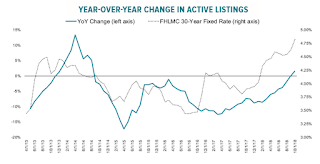 • Mapping the rise in inventory against 30-year rates, the current increase may be slightly lower and more delayed than expected based on what was observed in 2013/2014 and again in 2015/2016

• One potential factor could be homeowners with a mortgage hesitant to list their homes and give up a low fixed interest rate, i.e., "rate lock"

• Despite inventories rising, the average days on market continues to decline, with the median property listed for 68 days, down 5 days on average from a year ago

• Days on market tend to increase as inventories rise, so we may see a shift in coming months