Heavy truck sales really collapsed during the great recession, falling to a low of 181 thousand in April and May 2009, on a seasonally adjusted annual rate basis (SAAR). Then sales increased more than 2 1/2 times, and hit 480 thousand SAAR in June 2015.

Heavy truck sales declined again - probably mostly due to the weakness in the oil sector - and bottomed at 366 thousand SAAR in October 2016. 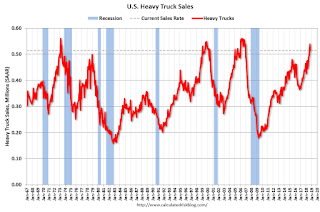 With the increase in oil prices over the last year, heavy truck sales increased too.

With the recent decline oil prices, and softness in housing, heavy truck sales will probably decline over the next few months.