Total nonfarm payroll employment rose by 250,000 in October, and the unemployment rate was unchanged at 3.7 percent, the U.S. Bureau of Labor Statistics reported today. Job gains occurred in health care, in manufacturing, in construction, and in transportation and warehousing.

Hurricane Michael made landfall in the Florida Panhandle on October 10, 2018, during the reference periods for both the establishment and household surveys. Hurricane Michael had no discernible effect on the national employment and unemployment estimates for October, and response rates for the two surveys were within normal ranges.
...
The change in total nonfarm payroll employment for September was revised down from +134,000 to +118,000, and the change for August was revised up from +270,000 to +286,000. The downward revision in September offset the upward revision in August.
...
In October, average hourly earnings for all employees on private nonfarm payrolls rose by 5 cents to $27.30. Over the year, average hourly earnings have increased by 83 cents, or 3.1 percent.
emphasis added 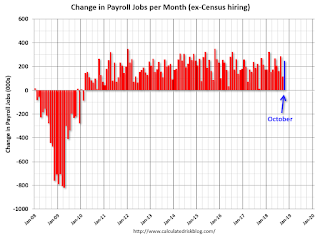 Payrolls for August and September were unchanged combined. 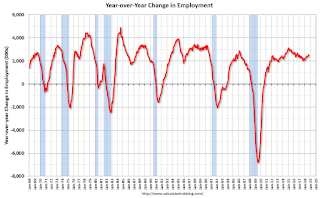 In October the year-over-year change was 2.516 million jobs. 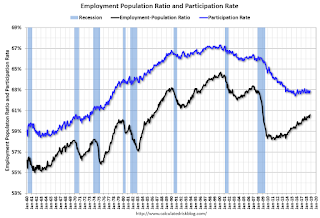 The Labor Force Participation Rate increased in October to 62.9%. This is the percentage of the working age population in the labor force.   A large portion of the recent decline in the participation rate is due to demographics and long term trends. 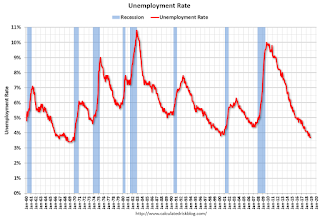 The unemployment rate was unchanged in October at 3.7%.

This was above consensus expectations of 190,000 jobs.  A strong report.