From the MBA: Mortgage Delinquencies Up Slightly in Third Quarter of 2018


The delinquency rate for mortgage loans on one-to-four-unit residential properties rose to a seasonally adjusted rate of 4.47 percent of all loans outstanding at the end of the third quarter of 2018, according to the Mortgage Bankers Association’s (MBA) National Delinquency Survey.

The delinquency rate was up 11 basis points from the previous quarter, but down 41 basis points from one year ago. The percentage of loans on which foreclosure actions were started dropped one basis point from the last quarter to 0.23 percent – its lowest level since the fourth quarter of 1985.

“Despite the small uptick this quarter, the healthy economy is overall supporting low mortgage delinquencies and foreclosure inventories,” said Marina Walsh, Vice President of Industry Analysis at MBA. “Unemployment is at its lowest level since 1969, wages have grown 3.1 percent year-over-year – the biggest jump in almost a decade – and job growth is averaging over 212,000 jobs per month thus far.”

Walsh notes that natural disasters are a major factor in determining whether borrowers make timely mortgage payments. Specifically, there were significant delinquency increases in states adversely impacted by Hurricane Florence and Tropical Storm Gordon, including North Carolina, South Carolina, Mississippi, Arkansas and Alabama. Hurricane Michael, which made landfall after the survey reporting period, will not be reflected until MBA’s fourth quarter survey. Walsh believes it will likely take several quarters for the most recent storms’ effects on the survey results to dissipate. 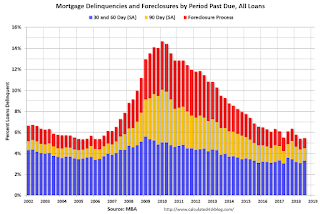 The percent of loans delinquent increased slightly in Q3, mostly due to the impact of Hurricane Florence.

The percent of loans in the foreclosure process continues to decline, and is close to normal levels.

Note: Delinquencies will probably increase further in Q4 due to Hurricane Michael.
Posted by Calculated Risk on 11/08/2018 10:35:00 AM
Newer Post Older Post Home