Las Vegas: Visitor Traffic down 1.3%, Convention Attendance down 2.7% compared to same Period in 2017

During the recession, I wrote about the troubles in Las Vegas and included a chart of visitor and convention attendance: Lost Vegas.

Convention attendance set a new record in 2017, but is down 2.7% in 2018 compared to the same period in 2017. Here is the data from the Las Vegas Convention and Visitors Authority. 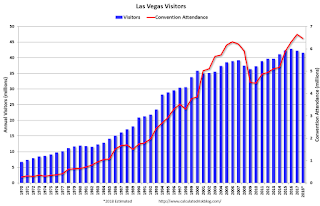 Convention attendance was down 2.7% through September compared to the same period in 2017.

Visitor traffic was down 1.3% through September compared to the same period in 2017.

Historically, declines in Las Vegas visitor traffic have been associated with economic weakness, so the declines in 2017 and 2018 are a little concerning for the Vegas area.