According to the Federal Reserve Bank of Cleveland, the median Consumer Price Index rose 0.2% (2.4% annualized rate) in October. The 16% trimmed-mean Consumer Price Index also rose 0.2% (2.7% annualized rate) during the month. The median CPI and 16% trimmed-mean CPI are measures of core inflation calculated by the Federal Reserve Bank of Cleveland based on data released in the Bureau of Labor Statistics' (BLS) monthly CPI report.

Note: The Cleveland Fed released the median CPI details for October here. Motor fuel was up 43% annualized in October, but that will reverse in November. 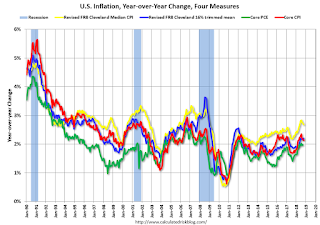 Using these measures, inflation softened slightly on a year-over-year basis in October. Overall, these measures are at or above the Fed's 2% target (Core PCE is slightly below 2%).
Posted by Calculated Risk on 11/14/2018 11:35:00 AM
Newer Post Older Post Home