Industrial production edged up 0.1 percent in October, as a gain for manufacturing outweighed decreases elsewhere. As a result of upward revisions primarily in mining, the overall index is now reported to have advanced at an annual rate of 4.7 percent in the third quarter, appreciably above the gain of 3.3 percent reported initially. Hurricanes lowered the level of industrial production in both September and October, but their effects appear to be less than 0.1 percent per month. In October, manufacturing output rose 0.3 percent for its fifth consecutive monthly increase, while the indexes for mining and for utilities declined 0.3 percent and 0.5 percent, respectively. At 109.1 percent of its 2012 average, total industrial production was 4.1 percent higher in October than it was a year earlier. Capacity utilization for the industrial sector was 78.4 percent, a rate that is 1.4 percentage points below its long-run (1972–2017) average.
emphasis added 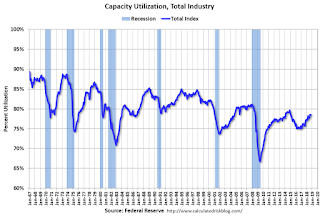 This graph shows Capacity Utilization. This series is up 11.7 percentage points from the record low set in June 2009 (the series starts in 1967). 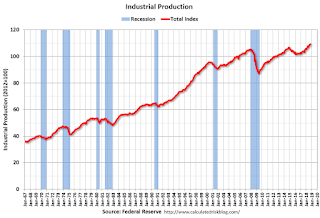 Industrial production increased in October to 108.5. This is 25% above the recession low, and 4% above the pre-recession peak.

The increase in industrial production was below the consensus forecast, however the previous months were revised up.  Capacity utilization was above consensus.
Posted by Calculated Risk on 11/16/2018 09:22:00 AM
Newer Post Older Post Home