Rent growth had accelerated a bit earlier in the year but fell to 0.4% in the third quarter, down from 0.7% in the second quarter. Both the average asking rent and average effective rent (that nets out landlord concessions) grew at the same rate in the quarter as they did in the prior six quarters. This suggests that landlord concessions have seen little change over the last year. One year ago, the average asking and effective rent growth was also 0.4%. At $33.20 per square foot (asking) and $26.94 per square foot (effective), the average rents have increased 2.5% and 2.6%, respectively, since the third quarter of 2017.
...
The sluggishness in the office market is nothing new, but the deceleration contrasts an otherwise healthy economy as office employment growth has picked up in 2018 from rates seen in 2017 (1.8% in 2018 vs. 1.6% in 2017). The recent higher rent growth had suggested that landlords were gaining confidence in leasing conditions, but net absorption has persistently trailed new completions over the last seven quarters as tenants have been hesitant to take on added space which has kept a lid on rent growth.

The office market statistics still reflect the gap between the haves and the have-nots: larger markets in the West, South Atlantic and larger Northeast cities with healthy occupancy and rent growth offset by tepid growth or declines in smaller, suburban markets in the Midwest or in less densely populated areas. However, the numbers show that the gap is narrowing.

We still await the announcement of Amazon’s selection for its HQ2. Will the news come before Reis releases its fourth quarter statistics? Or will the suspense kill us all. 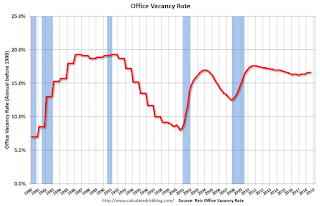 Reis reported the vacancy rate was at 16.6% in Q3.  The office vacancy rate had been mostly moving sideways at an elevated level, but has increased slightly recently.