Industrial production increased 0.3 percent in September, about the same rate of change as in the previous two months. Output growth in September was held down slightly by Hurricane Florence, with an estimated effect of less than 0.1 percentage point. For the third quarter as a whole, total industrial production advanced at an annual rate of 3.3 percent. In September, manufacturing output moved up 0.2 percent for its fourth consecutive monthly increase, while the output of utilities was unchanged. The index for mining increased 0.5 percent and has moved up in each of the past eight months. At 108.5 percent of its 2012 average, total industrial production was 5.1 percent higher in September than it was a year earlier. Capacity utilization for the industrial sector was unchanged at 78.1 percent, a rate that is 1.7 percentage points below its long-run (1972–2017) average.
emphasis added 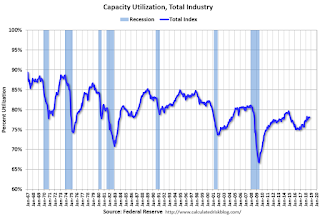 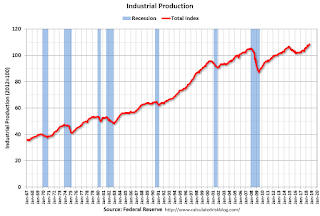 Industrial production increased in August to 108.5. This is 24.6% above the recession low, and 3% above the pre-recession peak.

The increase in industrial production was slightly above the consensus forecast - however capacity utilization was below consensus.
Posted by Calculated Risk on 10/16/2018 09:21:00 AM
Newer Post Older Post Home