From HotelNewsNow.com: US hotel results for week ending 13 October


The U.S. hotel industry reported mixed year-over-year results in the three key performance metrics during the week of 7-13 October 2018, according to data from STR.

In comparison with the week of 8-14 October 2017, the industry recorded the following: 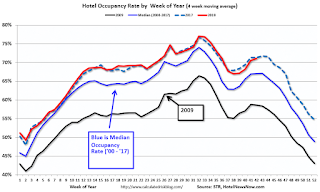 The occupancy rate, to date, is just ahead of the record year in 2017.

Note: 2017 finished strong due to the impact of the hurricanes.   There will be some boost to hotel occupancy in the Carolina and Florida regions following hurricanes Florence and Michael, but I expect the overall occupancy to be lower in 2018 than in 2017.