From the Dallas Fed: Texas Manufacturing Continues to Expand, but Pace Slows


Texas factory activity continued to expand in October, albeit at a slower pace, according to business executives responding to the Texas Manufacturing Outlook Survey. The production index, a key measure of state manufacturing conditions, was positive but declined another six points to 17.6, indicating output growth continued to abate.

Some other indexes of manufacturing activity also suggested slower expansion in October. The capacity utilization index retreated six points to 15.4, while the shipments index fell four points to 16.6. Meanwhile, the new orders index rose—pushing up four points to 18.9—and the growth rate of orders index held steady at 11.0.

Perceptions of broader business conditions improved this month. The general business activity index inched up to 29.4, and the company outlook index climbed seven points to 25.0. Fewer than 3 percent of firms noted that their outlook worsened, the lowest share since 2004. The index measuring uncertainty regarding companies’ outlooks retreated 13 points to 6.9. 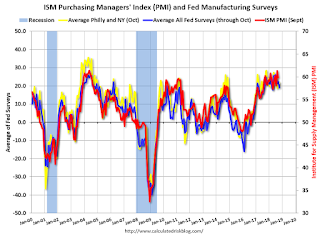 Based on these regional surveys, it seems likely the ISM manufacturing index will be solid in October, but below 60 again (to be released on Thursday, November 1st).
Posted by Calculated Risk on 10/29/2018 10:36:00 AM
Newer Post Older Post Home