New home sales for September were reported at 533,000 on a seasonally adjusted annual rate basis (SAAR). This was well below the consensus forecast, and the three previous months were revised down significantly. A very weak report.

Sales in September were down 13.2% year-over-year compared to September 2017.   This was a large YoY decline, although some of the decline might be related to the impact of the hurricanes. However the largest declines were in the North East and the West, and those declines were not hurricane related.

It is not time to panic - or start looking for a recession - but this was a very weak report. 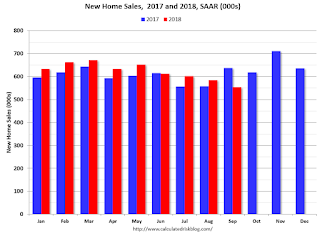 New home sales had been up year-over-year every month this year prior to this report.   Not only were sales down YoY in September, but with revisions, sales were down slightly YoY in June too.

Sales are only up 3.5% through September compared to the same period in 2017.

This is below my forecast for 2018 for an increase of about 6% over 2017. As I noted early this year, there were downside risks to that forecast, primarily higher mortgage rates, but also higher costs (labor and material), the impact of the new tax law, and other possible policy errors.  Also new home sales had a strong Q4 2017, so the comparisons will be more difficult - and sales might even be down for the year. 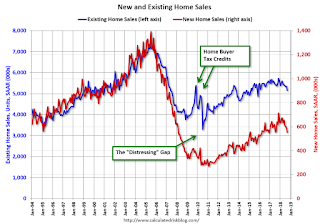 The "distressing gap" graph shows existing home sales (left axis) and new home sales (right axis) through September 2018. This graph starts in 1994, but the relationship had been fairly steady back to the '60s.