The Consumer Price Index for Urban Wage Earners and Clerical Workers (CPI-W) increased 2.9 percent over the last 12 months to an index level of 246.336 (1982-84=100). For the month, the index increased 0.1 percent prior to seasonal adjustment.

Last year was the highest Q3 average, so we have to compare Q3 this year to last year. 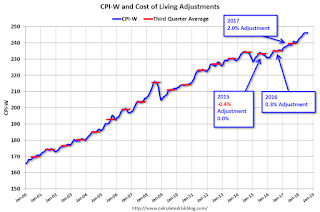 CPI-W was up 2.9% year-over-year in August, and although this is very early - we need the data for September - my current guess is COLA will probably be just under 3% this year, the largest annual increase since 2011.

The contribution base will be adjusted using the National Average Wage Index. This is based on a one year lag. The National Average Wage Index is not available for 2017 yet, but wages probably increased again in 2017. If wages increased the average of the last three years, then the contribution base next year will increase to around $132,000 in 2019, from the current $128,400.

Remember - this is an early look. What matters is average CPI-W for all three months in Q3 (July, August and September).
Posted by Calculated Risk on 9/13/2018 09:11:00 AM
Newer Post Older Post Home