This gives a total of 4.18% delinquent or in foreclosure.


Today, the Data & Analytics division of Black Knight, Inc.released its latest Mortgage Monitor Report, based on data as of the end of July 2018. This month, Black Knight looked at full Q2 2018 data to revisit the nation’s equity landscape. Despite the slowdown in the rate of home price appreciation seen throughout the second quarter, total tappable equity – the amount of equity available to homeowners with mortgages to borrow against before hitting a maximum 80 percent combined loan-to-value ratio – reached a record high. As Ben Graboske, executive vice president of Black Knight’s Data & Analytics division explained, even though Q2 2018 experienced the fourth strongest quarterly gain in equity since the housing recovery began, the slowing in growth observed was noteworthy.

“As the second quarter came to a close, the total amount of tappable equity available to homeowners with mortgages surpassed the $6 trillion mark for the first time in history,” said Graboske. “There is now $636 billion more tappable equity available than at the start of 2018, and nearly three times as much compared to the bottom of the market in 2012. Despite the noticeable slowing in home price appreciation over the past four months that Black Knight has reported on recently, some 44 million homeowners now have equity that could be tapped via cash-out refinances or home equity lines of credit (HELOCs). Although total available equity broke an all-time record, we observed strong and unseasonable quarterly slowing in equity growth. While Q2’s $256 billion increase in tappable equity was the fourth strongest quarterly growth since the housing recovery began, the decline from Q1’s $381 billion was significant, particularly given that historically, Q1 and Q2 are responsible for the bulk of equity growth in any given year.
emphasis added 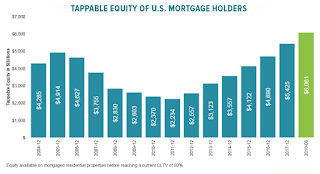 This graph from Black Knight shows their estimate of "tappable equity". 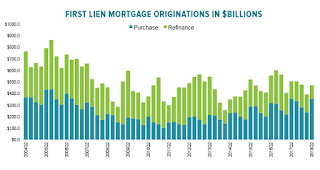 
• First lien mortgage originations rose 20% from Q1 due to seasonal growth in purchase lending, but were down 7% from Q2 2017 by dollar volume

• The number of purchase originations rose 2.0% year-over-year, and purchase lending was up marginally by volume as well

• Refinance originations dropped to $117B for the lowest quarterly total since Q1 2014, and at 484K, Q2 saw the fewest refinance loans originated in more than 17 years

• Refinance loans made up just 25% of Q2 originations by volume, the lowest such share in 18 years