Growth in regional manufacturing activity slowed in August, according to results from this month’s Manufacturing Business Outlook Survey. All the broad indicators remained positive but fell from their readings in July.
...
The diffusion index for current general activity decreased 14 points this month to 11.9, its lowest reading in 21 months. Nearly 32 percent of the manufacturers reported increases in overall activity this month, while 20 percent reported decreases. The new orders index fell 22 points to 9.9. More than 34 percent of the firms reported an increase in new orders, while 24 percent reported a decrease. 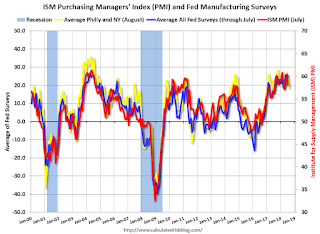