On a monthly basis, retail sales increased 0.5 percent from May to June (seasonally adjusted), and sales were up 5.9 percent from June 2017.


Advance estimates of U.S. retail and food services sales for June 2018, adjusted for seasonal variation and holiday and trading-day differences, but not for price changes, were $506.8 billion, an increase of 0.5 percent from the previous month, and 6.6 percent (±0.5 percent) above June 2017. Total sales for the April 2018 through June 2018 period were up 5.9 percent from the same period a year ago. The April 2018 to May 2018 percent change was revised from up 0.8 percent to up 1.3 percent. 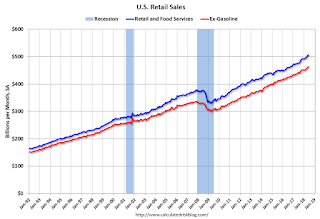 Retail sales ex-gasoline were up 0.47% in June. 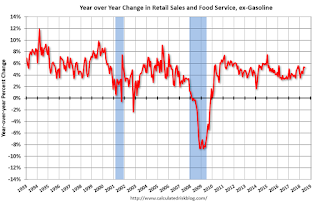 Retail and Food service sales, ex-gasoline, increased by 5.2% on a YoY basis.

The increase in June was slightly below expectations, however sales in April and May, combined, were revised up.
Posted by Calculated Risk on 7/16/2018 08:40:00 AM
Newer Post Older Post Home