Construction Spending increased 0.4% in May

Earlier today, the Census Bureau reported that overall construction spending increased in May:

Both Private and public spending increased:


Spending on private construction was at a seasonally adjusted annual rate of $1,005.4 billion, 0.3 percent above the revised April estimate of $1,002.3 billion. ...

In May, the estimated seasonally adjusted annual rate of public construction spending was $304.1 billion, 0.7 percent above the revised April estimate of $302.1 billion.
emphasis added 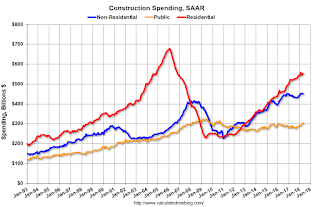 Private residential spending has been increasing, but is still 18% below the bubble peak.

Public construction spending is now 7% below the peak in March 2009, and 16% above the austerity low in February 2014. 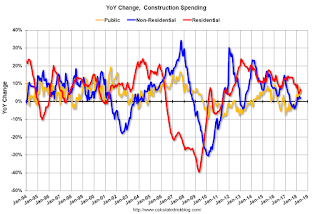