Annual Vehicle Sales: On Pace to increase slightly in 2018

Through June, light vehicle sales are on pace to be up slightly in 2018 compared to 2017.

My guess is vehicle sales will finish the year with sales lower than in 2017. A small decline in sales this year isn't a concern - I think sales will move mostly sideways at near record levels. 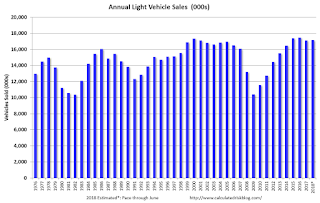 Sales for 2018 are estimated based on the pace of sales during the first six months.