From the National Center for Health Statistics: Births: Provisional Data for 2017. The NCHS reports:

Here is a long term graph of annual U.S. births through 2017. 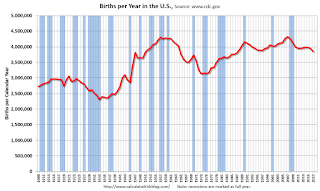 Births have declined for three consecutive years following increases in 2013 and 2014.

With fewer births, and less net migration, demographics will not be as favorable as I was expecting a few years ago.
Posted by Calculated Risk on 6/04/2018 11:04:00 AM
Newer Post Older Post Home