Did the Rebound in Oil Prices Rescue the Houston Housing Market?

Two years ago I asked: Will the Rebound in Oil Prices Rescue the Houston Housing Market?

The Houston Association of Realtors (HAR) just released data for May.

In May, active listing were down 1.4% year-over-year compared to May2017.   The current level isn't unusually high for the Houston market (inventory was over 50,000 in 2010), but inventory increased significantly when oil prices were falling. 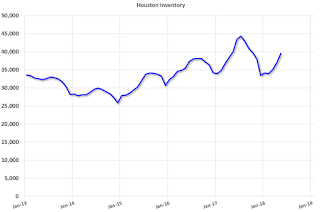 This graph shows the number of active listings in Houston since January 2013.

With higher oil prices, inventory has stopped increasing - after increasing for the previous three years.

It does seem the rebound in oil prices has helped the Houston market.