The graph below shows the year-over-year change for non-contingent inventory in Las Vegas, Phoenix and Sacramento (all through April), and also total existing home inventory as reported by the NAR (through March 2018).

Note: For Phoenix, there was a discrepancy between the "Market Report" and the "Stats Report".  For this graph, I'm using the Stats Report. 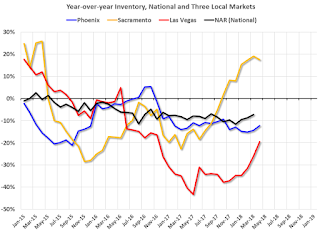 Also note the inventory is still down 19.5% in Las Vegas (red), but the YoY decline has been getting smaller - and it is very possible that inventory will up year-over-year in Las Vegas later this year.

I'll try to add a few other markets.

Inventory is a key for the housing market, and I will be watching inventory for the impact of the new tax law and higher mortgage rates on housing.  It appears the inventory decline might be ending in some markets.