First, an excerpt from a research note by Merrill Lynch economists today:


If bad luck intersects with bad policy, a recession becomes a real risk. We would keep a particularly close eye on two traditional business-cycle killers-the Fed response to stronger-than-expected inflation in the US and a growing shortage of oil, pushing prices to new heights.

So far the increase in oil prices isn't a concern for the economy, but it is something to watch. 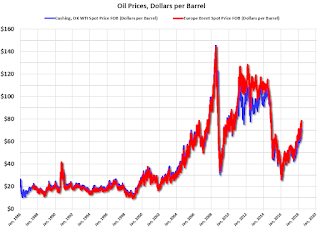 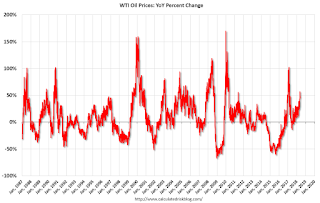 Six times since 1987, oil prices have increased 100% or more YoY.  And several times prices have almost fallen in half YoY.   Oil prices are volatile!