Here is a table from housing economist Tom Lawler showing the year-over-year (YoY) change for National inventory from the NAR, and the YoY change for California from the CAR.

It appears the YoY declines are slowing nationally, and inventory has started to increase YoY in California.


The graph below shows the year-over-year change for non-contingent inventory in Las Vegas, Phoenix and Sacramento (through April), and also total existing home inventory as reported by the NAR (also through April 2018). 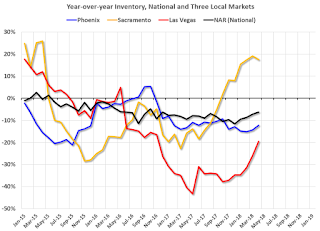 Also note that inventory is still down in Las Vegas (red), but the YoY decline has been getting smaller.

Inventory is a key for the housing market, and I will be watching inventory for the impact of the new tax law and higher mortgage rates on housing.   Currently I expect national inventory to be up YoY by the end of 2018 (but still be low).
Posted by Calculated Risk on 5/24/2018 03:59:00 PM
Newer Post Older Post Home